May be sold to a N Turner from Northampton around May 1989.

I found this picture whilst surfing... http://www.btinternet.com/~aff/TickfordOwnersClub/rs.htm 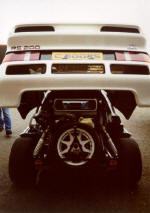 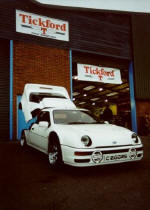 April 2004 - I have been in contact by email with the owner, Paul Cann, and he has the following info for the site.. 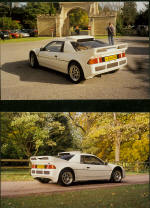 Third Owner -Steve Rockingham
Sold to him 14.12.1998
2936 Miles on the clock
Registration R 250 kept by previous owner and re-registered by DVLA as K648 XEL, changed 06.04.1999 to C20 ORS
Car featured in Jeremy Clarkson video 'Car Years'.
I had met Steve before purchasing the car on numerous occasions at Castle Coombe and expressed an interest in the car.

Fourth Owner - Mr P Cann
I bought the car 27.09.2002 complete with a full set of Body Panels, Lighting Pod, Ears, Original Style Wheels and Tyres etc. 5200 Miles on the clock. It currently has 5851 miles on the clock. Since then, the car is driven on sunny days and trips to shows at Castle Coombe.
The car has been recently photographed and measured for an up and coming 1/18th scale model and I have been approached by a TV company for the car to appear in a TV programme in the future on Sky, although this is not definite yet.
The final picture on your web site was taken at the Rally Super Car day at Castle Coombe last year.