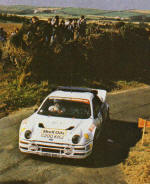 Driven by Mark Lovell and winning the British Open Rally Championship 1986 before being burnt out during 1986 RAC rally, Ford sold to Graham Hathaway for racing use only but without chassis number.

1987 Raced by Hathaway in UK Rallycross

1997 Converted for hillclimb German Championship
Look at Quaife catalogue 2003 on the page for RS200, the car has got a separate Hathaway chassis plate stating "Avon GHR 62" and the engine  is running Bosch ECU.
1998 Converted to Evo specs with 2100 cc

June 2004 - Another enthusiast, William Arnold, has sent an image for the database.

C200KHJ rolling in Twigleys Forest by the late (and great) Mark Lovell...

This is the full version with sound...