The letters GL are not always inside the number

There are a number of spare parts available for sale with which you could build yourself a "parts car", not an original RS200

This would be fine if you just registered it with DVLA who would issue you a new chassis number and an index.

DVLA do not apparently check to see if that VIN has been used before, they will just issue you with an index ., DVLA also have no way of seeing if that VIN is in use in another country. Then beware like for the 119 Chassis number car !

Bear in mind RS200's do have STAMPED CHASSIS NUMBERS also just like normal cars except the works cars ! 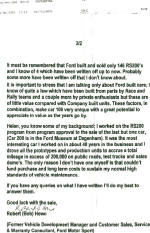