Sold to Stephen Schollwoeck in Germany.

One is the original owner from Germany who bought it new from Fords, the other is in the UK and being offered for sale and it s a scam !

June 2004 - Another enthusiast, William Arnold, has sent me a some images of the FRAUD SCAM CAR 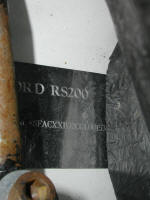 The program for the day listed it as being shown by Paul Alderson and this is a fraud !