"I bought it new circa 1987 (would have to check the logbook) after a test drive at Boreham. It was registered 200LMN in the Isle of Man and was stored at my home there for many years. Painted white and orange (picture to follow) it featured in the marketing brochures of Motis Systems (UK) Ltd, a company that supplied software and systems on mid-range IBM computers to motor dealers in the 1980's.

The car was supplied as tarmac rally spec, with an up-rated engine, but with road trim. It has run as safety car a few times
on the Manx National Rally (1990?) setting faster times than the competing cars and entertaining the spectators! It is much
more fun than the Audi's I drove in the New Zealand International in 1990 and 1991.

The car now has around 2000 miles on the clock and is in as-new condition as it has been garaged for almost 20 years.

I just don't have the time to make proper use of it so I have just had it shipped back to the UK, given the right offer, the car is for sale." 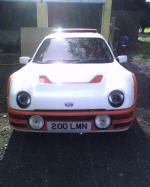 Has around 2,500 miles on her now and really needs running in all over again.

Robbie sent over a .pdf of the brochure that the car was turned orange