This car was originally shipped to Boreham in May 1986 in order to be prepared for the Finnish Rally of September that year. As a result of the banning of Group B the car was never completed.

#079 was then used as a static display car in Britain and Mainland Europe .

During September/October 1986 the car suffered bruises keep being transported between venues and was returned to Boreham for storage, it was from there that Mr Camplisson bought it.

I was passed this link by a friend http://alphabyte.co.uk/rs200/ 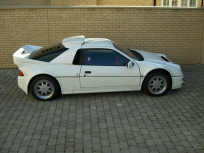 March 2004 - Chris Rees has bought this one and all the spares - The car was originally registered to FMC with the index F535LHJ and at one point had ELE10T on it.

January 2005 - Chris has sent me the latest image of the car looking very tidy again...

December 2005 - Sadly Chris lost his fight with cancer this month and thus #079 needs to find a good home, I have seen the car and it is very tidy, offers in the region of £50k should get you this one.