Driven by Mark Rennison and was sold by Graham Hattaway . Info verified as I ve spoke with Rennison myself 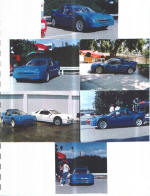 February 2004 - I found a RS200 being offered for sale on the www. - I spoke to the seller Richard Stewart who was trying to work out how much to ask for the car.

During the 1980's I was involved in Rallycross, both in the UK and Europe and witnessed an influx of RS200's from 1986 onwards into the sport. Interestingly not many of the cars I was familiar with appear in your listings, I can only assume many of these were made up from parts.

The Mark Rennison RS200 which seems to be identified as Chassis No 068 spent a good few years in the British and European Rallycross Championships. Evidence of this can be seen on Youtube.

I'm amazed this car is still in one piece considering the conditions Rallycross cars had to endure at the top end of the sport.

In fact, on it's debut outing at Brands Hatch it was involved in a start line incident with fellow Rallycrosser John Smith in his Porsche 911. The impact was so great the Porsche was destroyed in the incident, the RS200 front end appeared quite badly damaged along with Mark Rennisons confidence!!

. I do have fond memories of John Carter, who owned the car, cleaning the mud and dirt off his investment after every race. Quite an amusing site as he was quite a short man.

I have recently noticed Marks son Ben has started racing and has a Web Site which contains contact information for Mark Rennison http://www.benrennison.com/
I always remember Mark being an approachable chap so should you require more history of this Chassis I'm sure he would be willing to help.

I've also attached a couple of pictures I took of the car in action in British Rallycross during the late 80's. Please feel free to use them if you wish.

Once again, great site. Keep up the good work.